The Tragedy of Young Oon Kim

This post is meant to be further reading into the Young Oon Kim, who was mentioned in the latest episode of the show. If you haven't listened to Ep. 63 The Moonies Pt 2 you may want to do so before reading this post.

Sun Myun Moon, his first son, and Young Oon-Kim in 1957. Notice how Moon's son and Ms. Kim look uncomfortable? It's probably because in addition to a shit-eating grin, Moon likely has the odor of a person who eats shit.

In 1955, the Holy Spirit Association for the Unification of World Christianity was facing controversy following the arrests of Moon and other members of the church. Most other cult leaders would be dead in the water after being charged with adultery, unlawful imprisonment, and accusations of rape. However, Moon was as crafty as he was balding. Moon knew missionaries were the key to spreading his religion. During the early days of Busan, Moon sent missionaries to another city to spread The Divine Principle. Whether it was the dedicated and fully indoctrinated missionaries selling something they truly believed in or the fact that Moon wasn't there to fuck it up, the Daegu pioneer mission church was a success. So, like every man who has never pleased a woman, Moon decided he could use the same technique without changing a thing. In 1959, Moon sent missionaries to the United States to spread his religion like the spiritual STD it was becoming. The most promising, and truly successful, missionary was Ms. Young Oon Kim.

Kim, born 1914 in Korea, wasn't raised in a religious household. After a profound teenage experience with God (one far less narcissistic than Moon's), she joined the Methodist Church of Rev. Yong do-Lee (another controversial religious leader who paved the way for Korean cults). Kim truly found herself in the church and continued to have a close relationship with God. While working at a bank she heard a voice that told her she wasn't meant to work with numbers, but instead with people. Now, this may have been the voice of Jesus but it could just as well be the little voice all retail and customer service workers have in their head telling us that we shouldn't be working at a Jimmy John's and that we need to tell our 19 year-old manager to fuck off because I refuse to buy nicer pants to deliver fucking sandwiches. Or whatever. Either way, Kim merged her love for God and her need to help people and decided to become a professor of religious studies.

Kim didn't just learn about religion, she excelled at it. She was a graduate of the Methodist seminary at Kwansei Gakuin University in Japan, she did her postgraduate work at Emmanuel College at the University of Toronto (which she attended on a full ride scholarship from the United Church of Canada), and she was a sponsored observer at the International Christian Conferences in Germany and Switzerland. I honestly want to make fun of her for being such a nerd, but homegirl has a Master's Degree in Jesus and I worked for a 19 year-old named Jesús at a Jimmy John's so I will refrain from doing so. All of this is to say, Kim was one of the most qualified people to fill the role of Professor of the New Testament, Church History, and Comparative Religion at Ewha Woman's University in Seoul.

Moon, wearing a hat apparently stolen from Pharrell, and members that came from Ewha Woman's College. Young Oon Kim is in the back row all the way to the right,

Perhaps being brought into religion by a possible cult leader (Rev. Lee) primed her for the HSA-UWC, or perhaps she perceived Moon as another like-minded Jesus Freak who wanted to solve the world's problems. Whatever the reason, when a co-worker introduced Kim to The Divine Principle she was instantly enthralled by the ideas put forth by Moon (albeit stolen from Baek and actually written by Eu). She became such a devoted member to Moon's "family" that in 1955 when her University demanded its students left the church, she resigned from her job in protest. Kim stuck by her "family" even as she watched her "Father's" dirty (and super smelly) laundry being aired out to the public via newspaper coverage of Moon's trial. In 1959, when Moon asked for help fixing the situation, Kim agreed to move to America to open a pioneer mission church.

Kim landed in Oregon on January 4, 1959 and you better cue up some dope ass montage music because Kim got real busy real quick. By 1960, Kim had translated The Divine Principle and the Explanation of The Divine Principle into English. By 1970, Kim had founded the HSA-UWC as an official church in the USA with 500 members. Over the next decade she'd bring that number into the thousands. In 1975, she helped Moon found the Unification Theological Seminary and became professor of Systematic Theology and World Religions. Her cause was questionable, but her spirit is downright commendable. Now listen to the rest of that song I linked you to because Bill Conti is a musical genius and we're done with our montage.

We've had some fun so far, but there's a reason that this article includes the word "Tragedy" in the title. Kim, as I've hopefully proved to you, was smart and (arguably) a good person at heart. Her love of connecting with people and religion were very well utilized during the 15 years she was a professor at the UTS. Sure, her books were literally used as textbooks, but her most important lessons focused on her "off the record" insights into The Divine Principle and the early days of the church. Kim encouraged her students to not be bound by the letter of the texts, but to develop their own inner spiritual life through prayer, meditation, and reflection. "Dr. Kim taught us that learning to master human relationships is an essential key in a person’s religious life and spiritual growth.” recalls a former student. If you've listened to our episodes on Moon so far, you might recognize that her priorities are vastly different from Moon's (which seem to be the same as the late great Eddie Guerrero: Lie, Cheat, and Steal). When she realized the true intentions of the man she had dedicated her life to, it completely overwhelmed her.

After meeting the True Children, Moon's "official" children (Moon has A LOT of illegitimate kids), Kim was appalled to discover they were not held to the same standard as the followers of Moon. They didn't understand The Divine Principle, they did not show the conservative family-oriented values that Moon preached, some of the children outright abused the church members by doing shit like riding a motorcycle and doing donuts next to members trying to study. As a fellow degenerate: Sick, dawg, motorcycles are mad tight. As someone who doesn't have a small army of people who think my dad is Jesus: That boy ain't right. Obviously, Kim thought the same thing. Except the part about motorcycles being awesome. She probably also hated those.

"You don't really believe this stuff, do you?" she desperately asked her class on one occasion. On another, she told her class that Moon should go back to school because he didn't know much about Christian Theology or other religions. Kim began to air out Moon's dirty laundry, too, like she wished she would have done back in 1955. She told her students about how Moon believed the Earth was 6,000 years until he was confronted with science. After which he claimed that "God had come to him with a correction." She told them about how Moon thought Buddha was from China despite claiming to talk to Buddha regularly. The final straw was when Kim committed heresy in the eyes of Moon. "[Kim] told me that she believed [Moon] had some years ago lost his ability to read minds. That was why he had to employ three mediums," a former student said, "Once she hinted that Moon was not the messiah."

In 1988, suddenly and bitterly, Moon deposed Kim and ordered her to leave the church and return to Korea. After over 30 years of being a devoted follower and literally writing the book on the subject, Moon told Kim that she didn't know shit about The Divine Principle. "She had failed," remembered a member of the church, "We heard that he told her she must [assume the role of a child] and learn everything all over again." On the car ride to the airport, she wept in defeat. Young Oon Kim returned to South Korea to a life she had left behind. Kim burned all of the letters, books, and papers associated with Moon and the Unification Church. The fire that had slowly built inside of her had become realized upon the pile of her life's work. The work she did for a man she no longer believed to be the messiah. 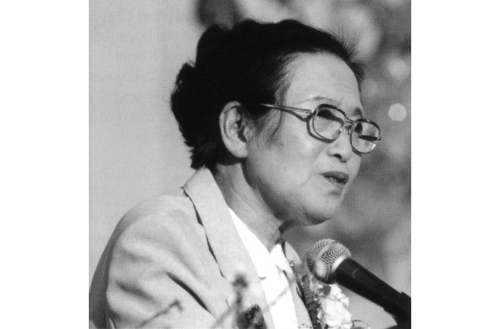 "Ms. Kim said, 'If you passionately love people, God comes so close.' I think that this was her most frequently made point over the [last few] years of her life." a former colleague recalls, "She would say things like, ‘Position is not important. Your identity or what you have accomplished [is not important]. What is important is love for other people.’ And this point she iterated and reiterated, because, I think, it was the conclusion that she came to reflecting on her own life." Young Oon Kim passed away on September 30, 1989 in South Korea. The Unification Church made no mention or record of her death. Sun Myung Moon did not attend any events in her honor. Her grave sits in Korea, simple and secluded, without the ceremonial symbol for the Unification Church.

Young Oon Kim supported Moon in the early days of his congregation. In 1953, she crossed the line of professionalism and used her position as a professor to spread The Divine Principle. In 1954, she helped Moon cover up the birth of his first illegitimate son. In 1955, she was culpable in helping Moon get away with adultery, unlawful imprisonment, and "blood cleansing". In 1959, she left her home and became the first missionary sent to America, and throughout the 1970's she helped build the infrastructure and the following for the American branch of Moon's cult. Despite all of that, you should mourn the loss of Young Oon Kim. In the face of a man that she thought to be Jesus Christ himself, she remained outspoken and critical. She had given up her life and even her marriage to devote herself to the church. Against the will of a man taking advantage of his followers, Kim taught her students to think for themselves. I honestly believe that Young Oon Kim is a good person. C'mon. Who among us hasn't worked for a gross sweaty man who uses his power and influence to take advantage of society? I know I sure did.